“Why would I change… if there are others who have far worse impact on the world?” This argument is something I hear regularly from people regarding individual unsustainable behavior. Where would we be as a society if everyone had this as a mindset? How do we deal with our problems, if the only thing that everyone is doing is pointing fingers? Don’t get me wrong, I’m not judging anyone who uses this argument, on the contrary, I think the majority of people, including myself, has a feeling that things sometimes aren’t fair. The biggest polluters should be the ones that change, right? But shouldn’t we do better than that? Shouldn’t we feel some personal responsibility for our actions as well?

I think we can all agree that we want to work towards a healthy and resilient future for the people and our planet. The question is, are we personally willing to change our behavior and give up some forms of unsustainable comfort in order to achieve that? Individual behavioral change could quite easily be among the most difficult obstacles of the energy transition. I think most of us are not consciously experiencing enough pressure or even positive stimuli for our behavior to change. We need to be triggered more in a way that we ourselves feel the need to change our behavior.

Furthermore, evidence in other research tells us that helping others is actually beneficial for your own wellbeing and mental health. It can help reduce stress, improve your emotional wellbeing and even benefit your physical health. 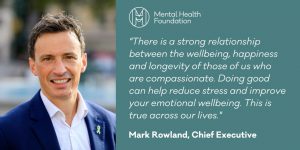 Rather than comparing our behavior with people who are doing worse (Downward social comparison), we could be inspired by people who are doing better (Upward social comparison) and may be better off. Obviously some people have more means and resources at their disposal than others, this is okay, this is life. It just shouldn’t be an excuse not to make the best out of your own live with the means and resources that you do have. For the sake of ourselves as individuals, others, our planet and future generations: Let’s leave unsustainable behavior behind and let’s start creating a better future! Well, that’s easier said than done. However, part of the solution to this problem could be found in our identities and let me explain why.

Looking at the science, while there are different theoretical perspectives on the self and how it is related to behavior, there is a shared general idea that in interaction, individuals seek to project an identity and consequently, their behavior reflects that identity. This means that if you don’t identify as someone who is sustainable, you probably don’t behave or act like one. So, ask yourself the question: “Do I identify as a sustainable person?”

My perspective is that most of us can honestly say that we don’t really identify as sustainable yet, which is why we don’t act like sustainable people. As society we are addicted to a lot of forms of unstainable behavior, just like someone can be addicted to cigarettes or alcohol. We know it’s not good for anyone, but in our mind, at least in that moment, we believe that the benefits outweigh the cost. How do we stop this addictive behavior? Like stopping smoking or drinking, changing identities and becoming a sustainable person is not as easy as flicking on a light switch.

One way that we could gradually change our identity is by starting with behavior; setting small goals for ourselves and create so called ‘Tiny Habits’. Professor B. J. Fogg from Stanford University developed the Tiny Habit method based on 20 years of research. I highly recommend watching his Ted Talk or reading his literature to learn more about his research and Tiny Habit method. The power of his method is in its simplicity. The main point he’s making is that behavioral change often does not work because it lacks triggers. So, how do you trigger yourself? According to Fogg, you can trigger yourself by unraveling the new behavior you want to learn in small (Tiny) steps and linking it to pre-existing routine (Habits). That’s it. Because you perform a Tiny Habit right after an existing routine, it becomes easier as the routine that you already have is the trigger to execute your Tiny Habit.

A nice way to articulate your Tiny Habit is: “After I …… I will…” So for example: “After I start the dishwasher, I will read one sentence from a book. This may seem insignificant but the whole point is to start a habit that requires minimal effort. Looking at the example above, over time this habit can progress and after a year you can quite possibly be reading a chapter of a book every time you start the dishwasher. Taking small steps like this and incorporating new sustainable habits can gradually change our identity, like cells changing in our bodies, which can consequently create real consciousness and change our natural behavior.