Home Where are the Renewable Energies of the Netherlands? | Blog by Lisa Hagemeister

Where are the Renewable Energies of the Netherlands? | Blog by Lisa Hagemeister

Being the land of windmills and bikes should make the Netherlands a frontrunner in all things renewable energy and sustainable living, right? Well, yes and no. In many regards, the Netherlands is leading the field of green energy innovation and research. However, in some aspects, they are still significantly lagging behind other countries in the race towards carbon neutrality. But how come such an advanced country still has these deficits and where are they making their greatest strides? Here’s a summary of the progress of renewable energy in the Netherlands.

Why are fossil fuels still the norm?

It is well-known that the largest natural gas field of Europe is located in the north of the Netherlands in the province of Groningen. The “Slochterenveld” is even one of the 10 biggest reserves worldwide. It was discovered in the 50s and since then it accounts for the lion’s share of Dutch energy production and consumption. Thus, it’s no wonder that to this day most Dutch households primarily use natural gas to cook and to heat their homes. However, that is due to change now.

Why is the Netherlands transitioning to green energy?

The dire consequences of global warming are no secret. They directly affect each and every one of us on a global scale. That’s why the renewable energy target set by the EU is to become entirely carbon neutral by 2050. Of course, the Netherlands has also committed to reaching that target by strictly cutting down on greenhouse gas emissions. In addition, a purposeful decision was made to entirely phase out the country’s huge natural gas production.

That is not an easy transition to make by a far stretch and as of recently, the Netherlands is still lagging behind most other European countries in terms of green energy production and consumption (Eurostat, 2018). However, that is not to be blamed on a lack of technical know-how or innovative development. A multitude of sustainable systems have already been put in place and are ready to be expanded to close the gap.

What are the Netherlands’ main renewable energy sources?

Biomass are materials such as wood, manure or organic household waste which are burned as a replacement for fossil fuels like coal. The Dutch government supports the development of this alternative and the transition of existing coal-fired power plants towards biomass energy (government.nl). The advantage here is clearly that the current infrastructure can be repurposed for energy generation with a renewable resource. However, there are also critical voices of this technology who raise concerns about its contribution to deforestation as well as the disproportionate amount of CO2 that the burning of wood releases in comparison to the energy it generates.

Wind energy on the other hand has been used by the Dutch for many centuries already for farming and food processing. Nowadays the old-school windmill has been replaced by modern wind farms that generate electricity with slowly but steadily increasing capacity. Most of them are stationed off-shore as there is often still pushback by communities who don’t take kindly to the power giants disrupting their picturesque countryside view. However, constant investments will only keep increasing the number of wind farms cropping up across the country and its shores. Thus, wind energy is set to become an integral part of the renewable energy mix which will power the Netherlands in the coming decades. 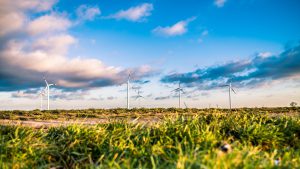 Solar energy is another known renewable energy source that is gaining prominence. Solar panels are becoming a common sight on rooftops in residential areas these days and there are ongoing researches on optimizing solar farms to build them off-shore as well. In the last couple of years alone the overall capacity of installed solar systems in the Netherlands has more than doubled. This technology is proving itself to be effective despite the often bemoaned dreary Dutch weather and many now recognize the benefits of powering their private households with solar energy.

Geothermal power is primarily used to heat residential or industrial buildings. It is done by pumping up naturally warm water which is stored in subsurface levels where temperatures are increased. In this case, the Netherlands’ position below sea level turns into an advantage because there certainly is no shortage of such subsurface water reservoirs. As of now, this green energy source is primarily used in the agricultural sector for the heating of greenhouses. However, it has the potential to become an important sustainable alternative to gas heating.

The future of renewable energy in the Netherlands

Right now the Netherlands still heavily relies on its fossil fuel resources for energy production and consumption. However, in light of the plans to phase out natural gas and hitting the target of zero carbon emissions by 2050 alternative green energy solutions are becoming more important than ever. Even so, there is still a very long way to go to make this a reality. Thus, it is vital that the support for the innovative minds who are driving the progress continues and that the coming changes are embraced. The foundation has been laid and now it is time to commit fully to the transition towards renewable energy in the Netherlands.

Lisa Hagemeister is student International Communication at Hanze University of Applied Sciences Groningen. She is currently doing her internship at EnTranCe.