TransFuture Festival: a review of the anniversary edition

Sustainability and new energy took centre stage yesterday during the anniversary edition of the TransFuture Festival at the EnTranCe testing ground. This anniversary edition saw an extremely comprehensive and varied programme for visitors, which offered plenty of scope for interaction with the public. Despite yesterday's heavy rain, the majority of the programme was well attended by enthusiastic and interested visitors.

As chairman for the day, Marcel Nieuwenweg gave everyone an introduction to the topics and ensured a high level of involvement. With the unveiling of Top Dutch Solar Racing’s solar car as the icing on the cake, we can look back on a successful anniversary edition!

The festival was opened by Nienke Homan, a member of the Provincial Executive for Groningen, around noon. After the happy countdown, most of the visitors went to the EnergyBarn for the Barn Talk by Manon Janssen. As a figurehead of the Top Sector Energy, she had the honour of kicking off the festival with a lecture on the manner in which the top sectors are implementing the Climate Agreement. The audience reacted sympathetically to her argument that we should stop complaining and instead get started with the energy transition. 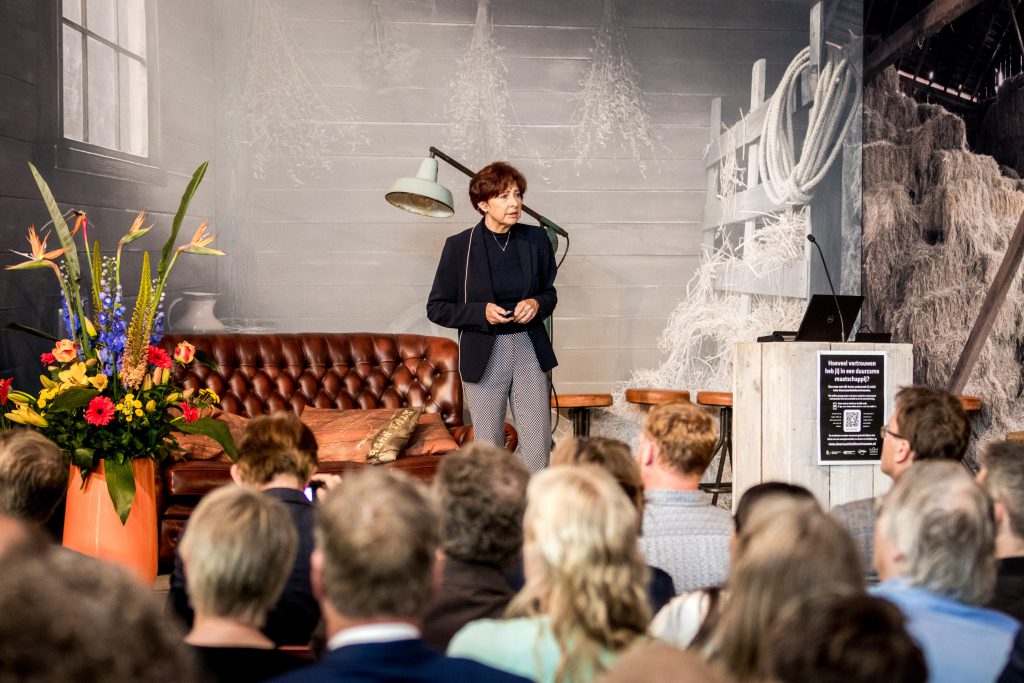 Innovation market
The booming innovation market boasted a wide variety of companies all making their own contribution to a sustainable society. For example, artist Martin Borchert revealed his plan for an updated version of the city marker ‘Gate Tower Clio’. This work of art has been standing alongside the A28 since 1990. Time, energy and the elements play an important role in the work. In the plan, the artwork undergoes an energy transition from fossil to sustainable fuels and counts down to 2035, the year in which Groningen aims to become CO2-neutral. The municipality of Groningen was also present with various projects including Groningen geeft energie, Paddepoel Energiek, our own WE-Energy Game and the chance to ride an electric motorbike.

Young Professionals
Right after the Barn Talk, a fashion show that presented an alternative to Fast Fashion kicked off in the Young Professionals tent. It was followed by the Final Symposium of the Sustainable Organisations minor and the Final Symposium of the Energy Transition Living Lab. A comprehensive poster presentation by more than 65 students showed results and recommendations from their research projects. Over the past six months, they worked on energy-related assignments. The winner was Joline Teisman, whose research took place within the Sustainable Ameland project. Teisman investigated ways that future tourism in the area could be made more sustainable.

Municipality of Groningen
The well-attended afternoon meeting in the EnergyBarn saw speakers from the municipality of Groningen discuss their ambition to move away from natural gas by 2035. These speakers zoomed in on the neighbourhoods of Paddepoel, Selwerd and Vinkhuizen in particular. The audience were very involved and interested, with many people asking questions about the impact of the increased sustainability measures on their 1930s, 1950s and 1960s homes in the city. As the municipality of Groningen needs to offer a solution for all types of housing, it still requires a great deal of knowledge and research in the run-up to 2035. The theme of the lecture was ‘You can’t start a fire without a spark’.

Top Dutch Solar Racing
Around six o’clock was the moment for which everyone had been waiting: the unveiling of Top Dutch Solar Racing’s solar car. This car will be used by the team to compete in the Bridgestone World Solar Challenge in Australia. The unveiling took place live on RTV Noord and was among the highlights of the festival. You can watch the broadcast again here: https://www.rtvnoord.nl/media/90343/Zonneauto-van-TopDutch-onthuld

EnTranCe, Centre of Expertise Energy
EnTranCe is Hanze UAS’s energy testing ground for applied research, education, entrepreneurship and innovation in the field of energy transition. As part of the New Energy Coalition, EnTranCe and the region aim to lead the way towards achieving national and international sustainable energy targets and boosting the region’s knowledge economy.