The North of the Netherlands goes down under during Solar Challenge

​Students of Hanze University of Applied Sciences (UAS), University of Groningen and Noorderpoort will be competing in the Bridgestone World Solar Challenge in Australia for the first time, with their own uniquely built and designed solar car called 'Top Dutch Solar Racing'. In the Bridgestone World Solar Challenge, student teams race 3,000 kilometres across Australia in solar cars.

Representing the North
Next to Delft, Enschede and Eindhoven, the North of the Netherlands is now also represented in the race. What makes Top Dutch Solar Racing unique is that, unlike other teams, the team does not only consist of solely students of research universities, but also of students of universities of applied sciences and upper secondary vocational education. The solar car is built in cooperation with authorities, corporations and educational institutions in the North of the Netherlands. 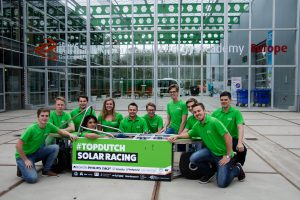 Top Dutch Solar Racing
The team was founded in February 2017 by a group of Hanze UAS students with the purpose of contributing to innovation and sustainability and broadening knowledge. As of now, the team consists of 26 students from various study programmes exchanging their talents and expertise. They work on the solar car on a daily basis from their own workplace on Hanze properties.

Bridgestone World Solar Challenge
The race kicks off on 13 October in the city of Darwin and ends in Adelaide on 20 October. Participants race from the north to the south, right through Australia’s outback. The teams set up camp every evening in the place they ended up that day. The race has been organised annually since 1987.