Sustainable living as a lazy person | Blog by Marloes Nieuwenhuis

Welcome to 2020! hopefully it will be as roaring as the 1920’s. When a year ends and people start to prepare themselves for the next one, a specific new year’s tradition starts to emerge all over the world: New year’s resolutions. What is a better way to forget about all the things you didn’t achieve, than to promise yourself you are definitely going to achieve them the next year. There is a wide range of common new year’s resolutions that most of us told themselves at least once in their lives. We all know the ‘I am going to eat healthy’ or the ‘I am going to stop drinking and/or smoking’ and maybe the most famous of them all ‘I am going to exercise more’.

However, there is a new (new year’s) resolution that seemed to have gained popularity within my personal social environment: the ‘I am going to live more sustainable’. But what does that mean ‘sustainable living’? Sustainable living can be defined as patterns of action and consumption that are adopted by people to ensure their basic needs, provide a better quality of life  and minimizes the usage of natural resources and pollution in order to not threaten the needs of future generations. Wanting to ‘live more sustainable’ and limit your carbon footprint sounds like great resolution, but actually changing your lifestyle is more difficult. Why is it so difficult when it comes to sustainability and climate change? In 2014 environmental campaigner and communications specialist George Marshall argued that climate change is hard because of PAIN. Considering this, it would be more than great if people would manage to follow through on their resolution. Unfortunately research shows that, even though the motivation for new year’s resolutions is high on the first of January, it tends to decrease over time. 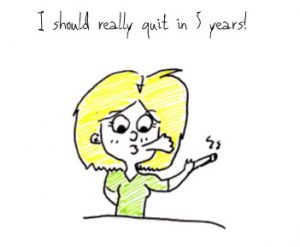 Personally, I am the worst at following through on my new year’s resolutions. Every year I tell myself almost the same thing and every year I fail just as quick as the year before. The thing is, I am a person that really likes a comfortable life. One might not always expect this from me, but deep down I am a very lazy person. And as a lazy, comfortable life wanting person, I have trouble giving up comfortable things. Especially if I won’t get anything out of it. Knowing this, you might expect that starting to live more sustainable would be the least of my priorities. Surprisingly enough, the opposite is true. Trying to live more sustainable has been the only new year’s resolution I have been able to keep in the past few years. Even though I never was a person with a high interest in or motivation for sustainable living. So, what made me change my perspective?

How it all started

When I started working as a researcher in sustainable  behaviour, my interest in the topic of sustainability (obviously) changed. At first, I just took the job because I liked the work, not specifically the  topic. All of a sudden, I was working with all these people that were making  conscious decisions in their life considering the environment. Colleagues who  were talking about replacing all their lightbulbs to LED-lightning and installing solar-panels. Colleagues who had electric bicycles so they could cycle all the way from their villages to the city instead of taking the car. Colleagues who were talking about cutting of meat from their diet, even though they really liked eating meat. Hearing my colleagues talk and seeing the pro-environmental measures they took inspired me. I started to acknowledge the importance of living more sustainable, yet there I was with my disposable coffee cup and ham and cheese sandwich in one hand and public transportation card in the other, ready to take the bus (from the city centre) to work. It didn’t take long before the cognitive  dissonance prevailed. Cognitive dissonance represents the uncomfortable  friction between someone’s attitude or beliefs and the behaviour that they’re  showing. In my case, I started to see myself as a person that cared about the environment and it felt hypocritical to promote sustainable behaviour while refusing to participate in said behaviour myself.

I decided that I wanted to change my behaviour. Behavioral change is stimulated by three main factors: attitude, social norms and perceived behavioural control. If someone has a negative attitude towards the desired (changed) behaviour they are less likely to change. Social norms refer to the social influence of someone’s environment. Perceived behavioural control refers to the extent to which someone actually believes they are capable in showing the desired behaviour.

When change is about to happen

I already had a positive attitude towards sustainable behaviour when I decided to change. As said before, my colleagues whom I spend most of my time during the week with inspired me with their conversations and their sustainable steps. New behaviours can be acquired by observing, imitating and modelling others. I did learn a lot from my colleagues by observing and copying them. I took a coffee-mug to work and tried meat substitutes during lunch. You could say that in the beginning I was led by example. Even though I had a positive attitude and great examples in my social environment regarding sustainable behaviour, I lacked a certain amount of perceived behavioural control. I came to the conclusion that I really wanted to change something, but I didn’t know how. Most commonly known measures were either or way too expensive (installing solar panels) or way out of my comfort-zone (vegan diet, giving up cheese and meat forever). As a lazy, comfortable life wanting person I would never be able to follow through with something like that. Research has shown that high motivated people will do anything whether its difficult or not. However, if you want low motivated people to do something, you have to make it as easy as possible. So, I started with small measures that didn’t require too much effort or money, for example: changing all my lightbulbs to LED-lightning, putting the thermostat a couple degrees lower and installing switch plugs on my appliances to prevent sneak consumption. The more I started to learn about all the sustainable options I had, the more I started to implement them within our Household.

So, am I living a complete sustainable life now after a few years? No. However, we did take a lot of small measures within our household, as we still don’t have a budget for large expensive measures like solar panels. Most measures are small changes such as: washing at no more than 30 degrees (except for sheets), using a shampoo bar instead of shampoo from a plastic bottle, using re-usable cotton pads and swabs and insulating our windows with weather-strips. I am still not the most sustainable person, I still eat meat sometimes, I love to shower for (more than) half an hour and I still take the bus to work. I learned that with small measures, starting with sustainable behaviour is not as difficult as I thought. Small steps lead to more steps, which makes it easier overtime, but in order to change something you just have to take a step first. 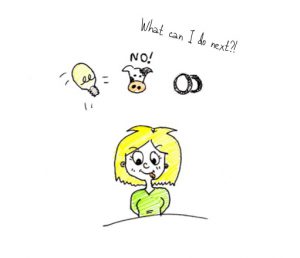 Maybe our next new year’s resolution should be to just take other small steps and limit our carbon footprint step by step to an acceptable level!