Blue Monday, better known as the most depressing day of the year. This year’s edition was especially eventful, as rumours started spreading about a potential curfew. This drastic regulation was new to Dutch people and came as an unpleasant surprise. However, the name Blue Monday has nothing to do with Covid-19 and national restrictions. Nonetheless, it has everything to do with another type of regulation, self-regulation.

Once a year humans have a weird tendency to set far too ambitious goals for themselves, also known as new year’s resolutions. Traditionally, Blue Monday is the day people realize they once again failed to reach these goals. The popular saying “New year, new me!” has evolved into a meme on social media, and for good reasons. Over time, this cheesy slogan has completely lost all credibility, as studies show that around 80 percent of people fail to comply with their yearly aspirations (Luciani, 2015). Although one might argue over the accuracy of this number, it does raise two important questions: why is changing behavior so extremely difficult and how can we improve this self-regulation process? 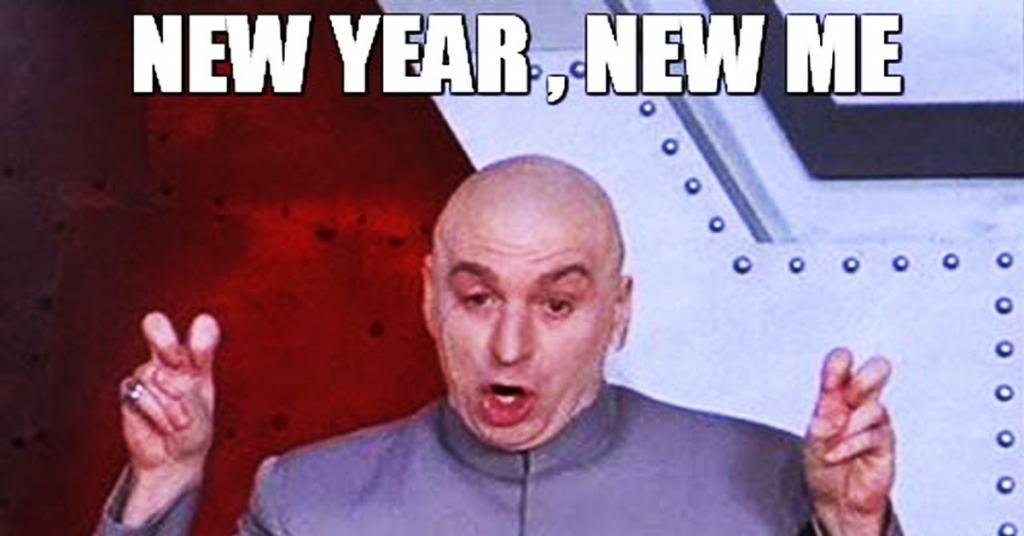 Before responding to these questions, I want to make one thing clear. Even if these new year’s resolutions would have been successful, one should reflect on the value of these accomplishments. For instance, what is the impact of losing 5 pounds on important issues like climate change, the polarization of society, and worldwide inequality? I know, this example does not make any sense, but it does provide some food for thought. Perhaps we tend to focus on the wrong type of behavioral change… As a response, this blog will offer some insight into the process of goal setting and behavioral change but focuses on topics that actually matter.

When and how do you start changing behavior? Let’s first discuss the ‘when’ aspect. The reason why timing is so important is psychological of nature. Remember that ‘new year, new me’ nonsense? It turns out there is a scientific concept explaining this, called the fresh start effect (Dai et al., 2014). It describes why people are more likely to change their behavior after important landmarks (e.g. new year). The reason being that it marks the passage of time, creating new mental accounting periods in which people actually are able to change (or at least think they are). Other examples of potential landmarks are holidays, birthdays, but also relocating to a new home, as suggested by Donald et al. (2014).

So, how should you start after having picked the right moment? The first step to successful self-regulation is goal setting. Several studies, dating back to the early 1900s, indicate a link between goal setting and success rate (Carson et al.,1994). However, the goal should be stated as clearly as possible. For example, even though reducing your water consumption sounds like a clear and valuable objective, it does not describe the actual behavior you want to change, making it hard to track progress. It can therefore be helpful to make an overview or map of the objective in mind, in order to visualize all actions that relate to this central goal. The figure below shows such an example. Based on this overview, you can select one or more specific actions and goals. 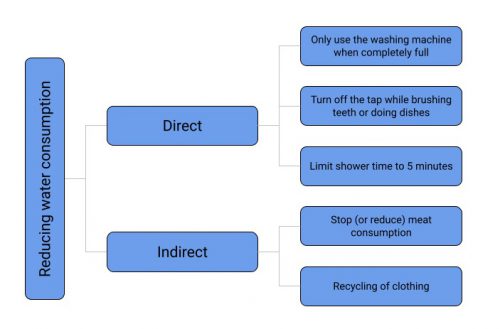 The overview can also help you determine challenges and make plans on how to deal with them accordingly. Allow me to explain. One of the reasons why self-regulation is so difficult is because behavior is influenced by ‘visceral states’, i.e. strong temporary emotions or urges (Critchley & Harrison, 2013). For example, few things can compete with the comfort of a long hot shower after a mental-breakdown. In this case, a person (un)consciously decides to focus on a hedonic, short-term goal, namely comfort (Lindenberg & Steg, 2013). However, this will be at the expense of the long-term goal of lowering the energy bill. As you can see, it is important to carefully plan ahead and prepare. A suggestion would be to use labels or post-its next to appliances or in the shower, to remind you of your goal (Kurz et al., 2005).

Once you know exactly what behavior you would like to change, you can start sharing your goal with everyone. “Wait, what?”, I hear you think, “wasn’t that the thing that annoyed people?” Yes and no. There is a difference between stating that you would like to limit your shower time and simply yelling “New year, new me!” Perhaps the reason why the phrase ‘new year, new me’ is so meaningless, is because it’s too broad of a statement. Anyone can say he/she has changed, but how? By keeping it vague, you reduce accountability. In other words, people are unable to check and correct you. However, if you explicitly mention your goal (eat meat once a week or limit showers to 5 minutes) people around you (and you yourself) are able to track progress.

Once again, there is scientific reasoning behind it. By making public commitments, you add the risk of losing face. Since no one likes to be inconsistent, people will go to great lengths to comply with earlier statements (Vaidyanathan & Aggarwal, 2005). Peer-to-peer commitments are based on a similar idea, they help people to persist as they don’t want to let the other person down (Hume et al., 2018). That’s why you and your roommate could (or should) make a commitment to each other. By sharing your goal and changing behavior together you increase the chance of success.

Figure 3: Example of commitment and consistency in action.

The last concept I would quickly like to address is feedback through monitoring. The power of feedback was indicated by numerous studies on several occasions, for example, in relation to energy consumption (Darby, 2006). Technological innovations like smart-metering are really useful for measuring energy savings. On the other, when smart-metering is not available (like in most student houses), old-school technologies like an hourglass in the shower can do the trick. Therefore, the lack of facilities should not be an excuse to postpone action (even if students are really good at it).

Figure 4: Limit shower time with the use of an hourglass.

But once again, to be able to receive useful feedback, you should have a clear goal. How else would you determine whether you’re successful? So first start by choosing the right moment to change. Next, make an overview of your goal and determine which actions are related. Also, think about the challenges you will face and how to deal with them. Furthermore, ask around if there are people that might want to join you. Once you have done all that, you are finally ready to update your social media status. But keep in mind, just posting the caption ‘new year, new me’ won’t cut it. Be specific in what you would like to accomplish, and you will be more likely to succeed.