The deterioration of the environment reaches the headlines more often nowaydays. Articles and newspapers about rising sea levels and extreme weather changes are becoming more popular. The increasing number of climate headlines is growing awareness on sustainable behavior among consumers changing their lifestyle and purchasing choices, resulting in an increasing role of corporate environmental responsibility in brands strategies.

People are starting to realize that their purchasing behavior is having an impact on the climate change and global warming. Especially, millennials (born between 1981 and 1996) are realizing the impact of their purchashing behavior. Therefore, they are more sensitivie towards companies who act more sustainable and embrace initiatives in order to fight climate change. As stated by Forbes, 87 percent of the millennials would be more loyal to a company that contributes to environmental issues. As this generation will drive the force to fight the climate change, sustainability needs to become one of the most important aspects for the company’s agendas.

A window of opportunity: Social Media

One of the companies that is trying to meet the demand for sustainability is Coca-Cola. As one of the biggest companies in the world, Coca-Cola is now focusing on a new campaign on how to create a more sustainable future on recycling. The campaign aims to create a circular economy for plastics, using the slogan: ‘Don’t buy us, if you don’t help us recycle’. The campaign is part of a worldwide recycle campaign: ‘World without waste‘. 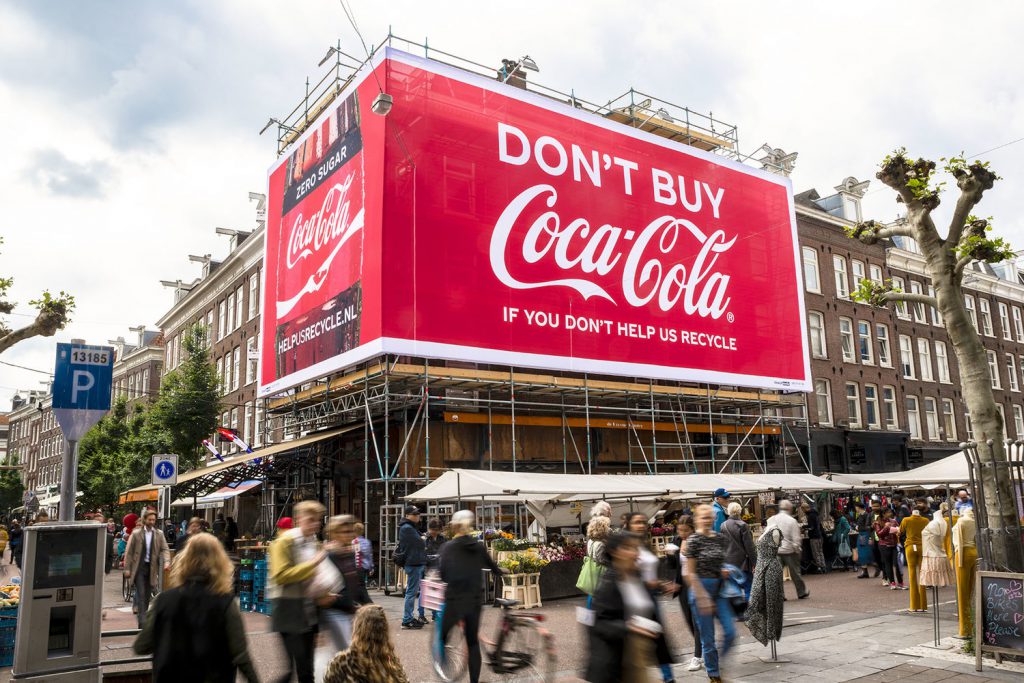 Coca-Cola tries to convince/ inform individuals about the consequences of plastics in the wilderness and encourage them to recycle plastics. The ‘Don’t buy us, if you don’t help us recycle’ campaign has been created in 2019 and was only used in the Benelux (Belgium, Netherlands and Luxembourg). The campaign in the Benelux has been mentioned 58 times on four different social media platforms (Twitter, Facebook, LinkedIn and Reddit), which is not quite much for a multinational organization. Meanwhile, social media can increase consumer’s environmental concerns, which in turn could lead to a positive attitude towards going green. Social media has become an important channel, creating a window of opportunity towards the motivation of pro-environmental behavior. This behavior could help to motivate people to recycle.

Social media is creating a window of opportunity for Coca-Cola to encourage people to recycle, but the percentage of recycled material used in Coca-Cola packaging went down the last year by 10%, which is a lot for a multinational company. Besides, it is quite contradictory. A company like Coca-Cola should first focus on their own recycling behaviour, before asking their consumers to take action. Especially, because sustainability rises rapidly on the agenda of consumers, therefore it’s a shame that Coca-Cola’s recycling behaviour has decreased the last year. Coca-Cola must take action to encourage consumers to recycle and to achieve their sustainable goal which is to use at least 50% recycling material in their packaging in 2030.

Of course, it is only possible for Coca-Cola to achieve its goal if consumers help to recycle. The percentage of Coca-Cola’s greenhouse gas derived from packaging is 25 to 30%. Nevertheless, it’s strange that they has not paid a lot of attention towards social media marketing. Because social media is not just a communication or marketing platform, it’s a platform that can influence the consumers’ behavior and purchasing decisions through multiple mechanisms. According to the Global Web Index 2019 eco-consumers are searching more (10%) on social media than on product or brand sites. How about Millennials? It is stated that 87 percent of the millennials would be more loyal to a company that contributes to environmental issues. So, this should be Coca-Cola’s target group for the recycling of plastics. This generation is concerned about the climate and wants a brand that embraces sustainability. Over 70 percent of the millennials is engaged in social networking platforms. For this reason, Coca-Cola should focus more and more on social media than traditional media, because it enables the firm to create more attention and personalize messages, while traditional media has only a stronger impact on brand awareness. Creating personal messages can make people feel more engaged and start thinking about recycling their bottles.

New social media campaigns could have a limited reach, but it definitely could help Coca-Cola to reach their sustainable goals. At this moment, the campaign has not been successful yet because the percentage of recycled materials has only increased by 10 percent over the past year. The pressure to be green will keep rising which means that Coca-Cola needs to start to accept their responsibility to humanity. Social media is a great tool that could help to influence people’s recycling behavior. People should be pushed more to recycle their packaging. Therefore, to be more effective and influential, Coca-Cola should personally encourage consumers to recycle by using more social media platforms.