H2Planet: An Energy Traveler at EnTranCe

After 40 years of moving all around Europe and the Middle East for his jobs in the energy business, Rene Wit was ready for something different. He took a chance and started his own company to make another impact on the world of energy. Nowadays he can be found almost every day in the Testing Ground of EnTranCe, Centre of Expertise Energy in Groningen.

When Rene retired, he was still far from done with working. The concerns about climate change that he had witnessed during his travels (droughts, smog in cities, melting polar caps, etc.) became an important catalyst that motivated him to look for sustainable alternatives. Hydrogen, a relatively unknown and expensive energy carrier at the time especially sparked his interest. The element enables you to store energy in a tank which is much more durable than using a battery.

In the name of H2Planet at EnTranCe Rene has his own location in a testing container where he works on hydrogen innovations for various sectors. Rene: “Running your own business was something new for me. Of course, I wasn’t used to that when working for a big company like Shell. Thanks to the Venture Lab program, I learned a lot about how to be successful as an entrepreneur.”

Thanks to the Venture Lab program, I learned a lot about how to be successful as an entrepreneur.

Rene has already achieved some great successes with the H2Planet project. He can call himself now a distributor of Horizon – a big scale producer of fuel cells –  in the Netherlands. At the moment Rene is working on a hydrogen cargo bike for fast food delivery as a passion project and he has also contributed to a system of a hydrogen boat for recreational purposes. Currently, he sells his own hydrogen products mainly to universities and high schools that use them for educational purposes.

He also offers hydrogen systems for industrial and domestic use. Although, as of now it still costs around 30.000 Euros to create hydrogen, store it and make electricity and heat for a small house with a hydrogen system. However, according to Rene, it’s only a matter of time until the price of hydrogen energy decreases. Rene: “Solar panels and solar cells (which convert solar energy into electricity) were also not affordable ten years ago, but now you see them almost everywhere.” He predicts that the same will happen with hydrogen which would make it more attractive to households and companies that aim to be self-sufficient. 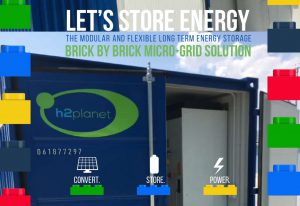 On top of this, hydrogen production is possible everywhere. For example, at the sea, in the mountains, or even in the desert. All that’s needed is solar, water or wind energy. That’s why Rene strives to position hydrogen on the international energy market as a sustainable and attractive alternative for fossil fuels. Rene: “Here in the Netherlands we’re doing quite well, as that’s naturally in our blood. We have always been innovators and businessmen in that regard.” As an example, he mentions that students in the Netherlands developed the first hydrogen racing car in the world. “That really was a scoop!”

Likewise, Horizon already has plans to start distributing a 350kW brand-new fuel-cell which will soon arrive on the market. This will unlock new sustainable energy market opportunities such as generator systems, trucks, trains, boats and many more. This new venture will undoubtedly be in line with the motto that is the driving force behind all of Rene’s projects and endeavors; sustainable energy and ‘power to the people!’