Today’s world has become an enormous network of interconnected parts that are constantly in motion. Day in and day out people travel from A to B on foot, by bike, scooter, motorcycle, car, bus, train, boat or airplane. However, according to the new European Green Deal transport is to blame for a quarter of all CO2 emissions in the EU (europa.eu, 2019). Because of this massive amount, innovations of green mobility are now on the rise and gaining popularity.

Welcome to the land of bikes

As the nation of cycling, the Netherlands naturally lends itself to the growing development of traveling green. Amsterdam was actually ranked second-best in a global study that compared the green mobility of cities (nos.nl, 2019). However, the real poster child of carbon-free transport can be found further up in the north of the country.

The city of Groningen has succeeded in protecting its historical center by taking decisive action and heavily restricting the access for cars and buses. Thanks to high parking fees, and the combination of one-way streets and pedestrian zones it is now in large parts reserved for people on foot and on bikes. Thus, the streets are almost entirely free of traffic noises and congestions as well as air pollution. On top of this, nowadays more than half of the city’s traffic consists of bicycles. Anyone who has been to Groningen can most certainly attest to that.

However, it doesn’t stop there. Now there are even talks of intelligent traffic lights that prioritize bikers on rainy days and heated bike paths to avoid slippery ice in winter. If the city center ends up turning such measures into reality they’d be well on their way to becoming the ultimate paradise for bikes.

Apart from the pre-existing Dutch biking culture, Groningen is also advancing its other modes of transport to create a green urban mobility grid that runs on sustainable energies.

The buses that follow their routes through the city and nearby neighborhoods every day have seen a change in recent times. If you take a bus line in Groningen today chances are high that you will catch one of the brand-new electric busses which have replaced the old regular models. In fact according to Qbuzz soon half of their bus fleet up in the north of the Netherlands will run entirely on electricity.

Recently another milestone was achieved when the first train powered by hydrogen energy completed a test run between Groningen and Leeuwarden. Apart from being entirely carbon-neutral, this novel train also has the added advantage of traveling much quieter than the regular ones currently do. However, as of now the infrastructure for this green alternative still comes with added costs. So whether or not hydrogen train lines will become a permanent feature of public transport around Groningen remains to be seen. 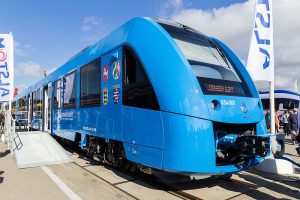 Companies like Tesla have put electric cars on the mainstream map in recent years and Groningen is also becoming more friendly for such vehicles. Right now there are almost 250 different charging stations for electric cars within the city of Groningen and the surrounding area. As their numbers increase it will definitely become more attractive to opt for CO2-free vehicles in the future.

E-scooters that zoom past on busy streets and sidewalks are a common sight in European cities these days. However, it seems as if they are entirely absent from Groningen and everywhere else in the Netherlands. This due to the rigorous regulations that were put in place after a fatal accident involving an electric wagon a couple of years ago. Since most of the existing e-vehicles don’t comply with these rules Dutch streets and bike paths remain free of them.

Green mobility has always been a fixed part of Groningen’s cultural life, even long before the term was first invented. Nowadays the city is staying true its roots and continues to move with innovative and sustainable ways of transport towards a green future.

Lisa Hagemeister is student International Communication at Hanze University of Applied Sciences Groningen. She is currently doing her internship at EnTranCe.