Home ‘’Don’t buy coca cola if you don’t help us recycle!’’ – A bold or a courage statement?

‘’Don’t buy coca cola if you don’t help us recycle!’’ – A bold or a courage statement?

According to Greenpeace, Coca Cola has been a top pollution brand over the last years and it’s consistently at the top three of polluters in regional and global categories. Because Coca Cola suffers big pressure from individuals and communities from all over the world rejecting single use plastic, Coca Cola started a global campaign in order to encourage people to recycle their plastic Coca Cola products, which was executed by Noise.

In June 2019 the campaign started in the Netherlands, hanging out a large banner on the Albert Cuypmarkt (south of Amsterdam – left picture below, next page) with the text: ‘’Don’t buy Coca Cola if you don’t help us recycle’’. With this message Coca Cola tried to encourage consumers to only buy Coca Cola if they recycle the bought product. Consumers could win prizes when going to this website, making a picture of their Coca Cola product and add their location. Via this website consumers get information where they can deposit their used products (example: right picture below, next page), so that Coca Cola will be able to recycle them, and letting consumers immediately knew if they have won a prize.

The scope of the campaign was aimed at the Benelux area, and it mainly got shaped in the Netherlands through the billboard in Amsterdam. But why did Coca Cola start here, with such a remarkable first move? Not to forget that currently a discussion is going on in the Dutch politics, which focusses on the obligated recycling of small plastic cans.

So, maybe it wasn’t a coincidence that Coca Cola started the campaign in the capital of the Netherlands? Nonetheless, Coca Cola’s image will become a lot greener with this campaign, but still the question rises whether Coca Cola really wants to increase recycling efforts, or the company just wants a green image and decides that is enough. 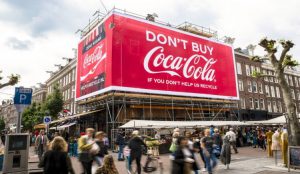 Daan Berendsen, marketing manager of Coca Cola, highlights that the message ‘’don’t buy us if you don’t help us recycle’’ is quite bold, or even dangerous, because this message actually says that Coca Cola rather don’t want consumers to buy them if consumers just throw away the cans in nature. Coca Cola wants to be a brand which belongs to literally everyone, and with this statement Coca Cola indicates that people who don’t recycle Coca Cola’s plastic products shouldn’t buy them. So, perhaps Coca Cola belongs not to everyone anymore?

Effectiveness of the campaign

2. On the other hand, the bold message of Coca Cola can direct people towards the ‘right’ direction of sustainable behaviour, since the message indicates that Coca Cola only wants that people with a sustainable attitude buy them, and so offering Coca Cola the opportunity to recycle. Environmental activism, private- sphere environmentalism and other environmental significant behaviours (like offering consumers an application which shows where they can bring their plastic Coca Cola products for recycling purposes) are categories in which significant environmental behaviour can be distinguished, and causes that consumers are adopting these kind of behaviours as well since they see Coca Cola as an example. In this way, one of the biggest market leaders within the global soft drink industry functions as an example of how they want to become a more sustainable company with the help of their consumers.

3. A different way of convincing consumers to change their sustainable behaviour is through another type of message. Coca Cola should be aware that the persuasive impact of others’ behaviour can have a positive influence on the choices of the target audience. Instead of the bold message, Coca Cola could choose for a more ‘embracing’ message (see picture below), in which Coca Cola can highlight that they really belong to everyone, just like the environment in which all consumers live. An example message like ‘’Join your fellow citizens in helping to save the environment’’ (like Cialdini states) changes the focus of Coca Cola towards the many consumers that act to preserve and protect the environment, and causes that other consumers will adapt their behaviour. The effectiveness of this type of message was investigated by Cialdini, and resulted in an increase of sustainable behaviour among people.

The approach of the campaign by Coca Cola can be seen as bold or courage, but the message clearly indicates that the company has large ambitions in recycling behaviour of their consumers. The approach can have different effects on consumers, but the fact that a global leader such as Coca Cola is bold or courage enough to provide their consumers with this type of message tells us that Coca Cola is ready to act more sustainable, which is actually quite impressive.

A blog by Jelle Westra